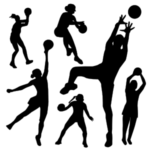 Our netball teams were in action on Tuesday night and continued their winning run! We played two teams from St Aelred’s Primary School and both matches were a superb display of skill, commitment and team work. The children have worked so hard in training sessions and this paid off in their performance on the courts. A 4-1 win in the first game and a 7-1 win in the second game. Our players of the matches were Freya M and Ben R. Thank you to all the parents who came to support the teams.

Our girls football team was in action last night and narrowly missed out on a win with some superb team and individual performances. It has been fabulous to see some of our Y5 and 6 girls enjoying their football sessions with Rosie Todd this year and great to see pupils involved in school based competitive sport again! The team lost 1- 0 to St Wilfred’s School and 2-0 to Lord Deramore’s School. Player of the matches was Evie S in goal putting on a brilliant display of action. Well done to all the girls involved and thank you to the parents for the transport and support.