The sporting fixtures are steadily coming back with some superb football being played on Tuesday night against Osbaldwick Primary. The weather was appalling and I have never seen our back field quite as wild as it was, but the boys played with true grit and resilience! Mr Scoreby were so proud of their teamwork and the skills on display were superb. Thank you to all the parents who supported their son in those dreadful conditions…. I went home for a well-deserved hot chocolate to warm up! 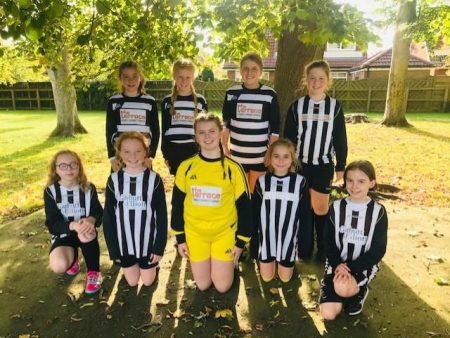 This was quickly followed by the Y6 girls team participating in a girl only competition at Vale of York School on Thursday. Mr Scoreby accompanied the team and said ‘they were an absolute pleasure to take out of school!’ They improved their football skills, worked as a team and enjoyed a fun morning of sport. It’s so nice to have some of the sporting competitions slowly creeping back in again. Many thanks to the parents for being their taxi service too!

Dunnington vs Osbaldwick
Team 2
Year 5 and 6 at Dunnington and Osbaldwick Primary School played a match on Tuesday 5th October 2021. It was a very cold and wet evening! Dunnington, team 2, lost their first match 1-0 however, in the second game they won 5-0. Four blistering goals were scored by Zac B and then an astonishing goal by Max M. All the team displayed amazing teamwork skills. Beautiful saves by Ben V.
Team 1
Despite the rain, two fantastic games from team one and team 2 the first game 3-0 to Dunnington three brilliant goals from Ben RG, good team effort, Two great assists from Max K and Owen and some good saves from Charlie M. In the second game we drew 1-1. We initially went down 1-0 but we did not give up and Ben RG scored again. Overall both teams played superbly well. Well done Dunnington.
If we added all of the scores together Dunnington won 9-2Report by Freddie B and Charlie M